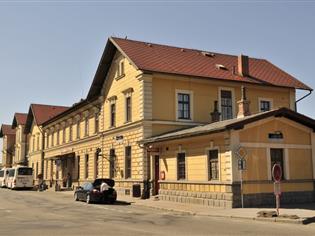 The history of the railway station building is well connected with the construction of the railroad from České Budějovice to Prague. The southern part of the station was built in 1871 in Neo-Renaissance style. The northern part with a waiting hall is an extension from 1895. During the construction of the northern part, the Imperial lounge was placed in the centre. It was used as a luxurious waiting hall for Franz Ferdinand d’Este.