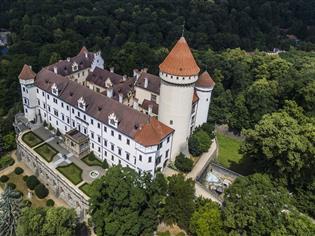 The castle of Konopiště was founded at the end of the 13th century, probably by the bishop Tobias of Benešov. It was built as a Gothic fortress copying the design of French castels.First building alterations were ordered by George of Šternberk at the end of the 15th century, and later by Hodějovští of Hodějov in the 17th century. In the 18th century, Vrtbové of Vrtba converted the castle into a Baroque palace. Francis Ferdinand d’Este, who bought it in 1887, had it rebuilt into a grand emperor’s residence.